Article shared in full - from https://www.mcgill.ca/oss/article/health-technology/can-allerpet-solve-your-pet-allergies

I own nothing -  only copy/pasting info

Can Allerpet Solve Your Pet Allergies?

Allerpet markets itself as a pet dander remover that can provide relief for all animal allergy sufferers. But not all allergens come from pet dander, and studies have shown that it is no more effective than wiping with a damp cloth, and much less effective than washing.

Ada McVean B.Sc. | 8 Feb 2019
Health
Technolog
Want to cuddle cats but can’t stand the coughing? Want to romp with Rover but avoid the red eyes? Allerpet markets itself as the product for you! Sadly, though, it doesn’t work.
Allergic reactions occur when your immune system comes into contact with an allergen to which it is hypersensitive. In the case of cats, these allergens can be a few different things. The two biggest culprits are the proteins Fel d 1, secreted by cats’ sebaceous glands (which are found over their entire body) and Fel d 4, found in cats’ urine and saliva. Dogs also produce multiple proteins in their hair, dander, saliva and urine, and those can trigger allergic reactions.
The allergens produced by sebaceous glands are present in dander (animal dandruff) and tend to be the most annoying to allergy-suffering pet owners. Dander is made of microscopic skin flakes and can float in the air for hours, just waiting to be inhaled by an unsuspecting human. It can quickly spread to every surface an animal has contact with and readily collects on soft items like beds and couches. The amount of dander an animal gives off increases with their age, hence why some pet owners are fine for years before they develop allergies to their companions.
One study estimated that 26% of European adults are sensitized to cats and 27% to dogs. Cats’ reputation as allergy-enhancers comes from their ability to spread their allergens much more effectively than their canine counterparts. Cats tend to have access to entire homes and to stay inside 24/7, whereas dogs may be contained to an area of the house and often leave for walks or visits. Dogs are usually bathed more often than cats, which removes some allergens whereas cats spend a significant portion of their day grooming themselves, during which the allergens from their saliva are spread throughout their fur, and released into the air along with dander.
So what can you do If you’re allergic to your fluffy best friend? One product, Allerpet, is marketed as a “pet dander remover” to “people with allergies to pets.” It’s a damp wipe that can be applied to pets of all kinds while they sit in your lap, and its maker claims that it can cleanse your pet of dander and other allergens, thereby restoring your ability to play with them sneeze free.
Their website states that “Allerpet products have been recommended by Allergists & Veterinarians for over 25 years!” and that they are “recommended by veterinarians for all pet allergies,” which leads me to question if these veterinarians have read the studies testing the product, since they’re not very positive.
A 1995 study compared weekly washings with distilled water and weekly treatments with Allerpet. Researchers sampled the Fed d 1 protein given off by each cat twice a week for eight weeks and concluded that there was no significant reduction in allergens. Similarly, a 1997 study compared brushing and wiping cats with either Allerpet, water or nothing on a cloth and found no difference between the amounts of allergens removed by these methods. They concluded that, while wiping a cat is easier than washing one, wiping with Allerpet, water, or nothing is five times less effective than washing a cat.
Allerpet contains ingredients similar to conventional shampoos (although it is much more expensive), as well as aloe vera which is actually toxic to cats and dogs and which can irritate guinea pigs intensely. Since the concentrations of the ingredients aren’t known, it’s impossible to know if the aloe in Allerpet could really pose a risk to pets. Since the animal product industry has relatively little oversight in North America, it’s possible that this product is being marketed for animals on which it was never tested.
Even if this product did work for dander, the allergens present in animals’ urine and saliva would still be present, ready to cause your runny nose. Reviews of it on Amazon are littered with stories of its failure to relieve allergy symptoms, as well as a few cases of it making cats vomit and giving dogs hives. Anecdotes are not evidence, but taken with the evidence that Allerpet doesn’t work, they’re enough to make me wary of even trying this product on my pets.
Sadly, truly hypoallergenic breeds are a myth. No cat or dog breed is completely allergen free, but there are various breeds that produce fewer allergens. Since dander attaches itself to hair, an animal that sheds less or is hairless will likely spread fewer allergens throughout your home. In the same vein, an animal that’s physically smaller has fewer sebaceous glands with which to produce allergens, so will likely trigger fewer allergies.
So if snuggles with Fluffy cause you to sneeze, there are a few things you can do. Most importantly, skip the pseudoscientific products. Consider a low-shedding small cat or dog for your next rescue. Install a HEPA air filter or two around your house. Wash your companion regularly (so long as they aren’t a rabbit or chinchilla). Keep them out of the bedroom, vacuum lots, and ask your doctor about allergy shots or prescription medicines.
Or get a pet fish.
Posted by Kender Siberian Cats/Kittens in AZ at 8:49 PM No comments:

We do  invite everyone to visit us, follow us, and join us there.


Kender is tickled to announce we do have a couple of litters of kittens available for the 2020 year ! 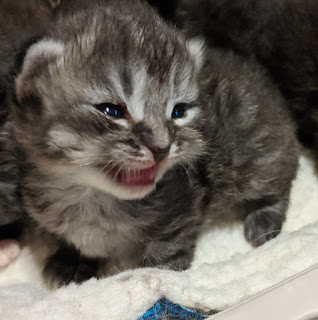 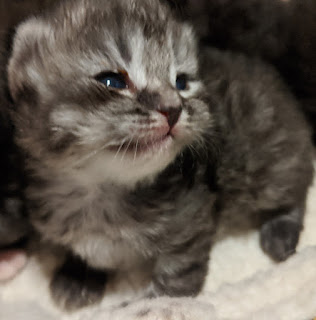 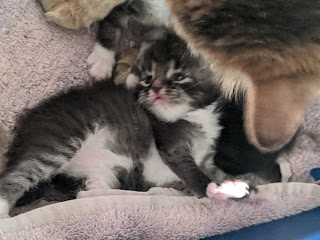 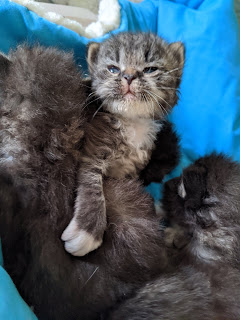 This super handsome silver and white boy is RESERVED!

The red and white "shy" boy - is already reserved.
Posted by Kender Siberian Cats/Kittens in AZ at 8:45 PM No comments:

Once Again Kender has done it. Another Grand , and a Girl at the young age of 11 months. What a feat ! 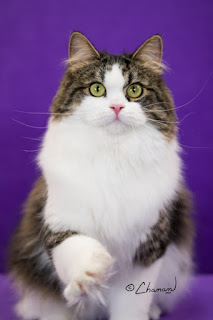 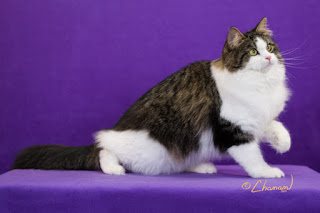 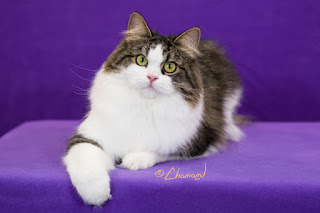 Posted by Kender Siberian Cats/Kittens in AZ at 9:30 PM No comments:

For all you feeding cats - and lets face it , why would you be reading this blog if you weren't? Then let me stress the importance of proper nutrition.

AND if you purchased a Siberian from us - our contract clearly states you need to continue the feeding of the Nu Vet Vitamin mix. 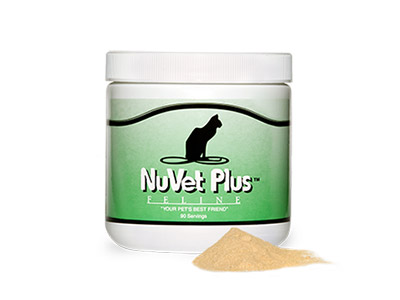 IT is simply the best most complete product of its kind on the market today. Small batch made - USA made in So Cal. Vet formulated . Utilizes cold processing not heat/cooking and made in an FDA Registered Facility using CGMP standards

Dont be fooled by those products with similar sounding names. Know what you are buying.  And get the best.


Posted by Kender Siberian Cats/Kittens in AZ at 9:15 PM No comments:

Kender is letting a few kittens go. Breeding homes will be considered, meeting our criteria.

We are also slowly switching our social media over to MeWe , as Facebook has be "aquired" by PETA. They now have enough shares bought to permit policy suggestions/changes - and we already know that Zuckerberg is anti-breeders and breeding.

Please join us on MeWe at -  Kender Siberians

Marcus is an amazing little fellow getting neutered July 10th available to come home that weekend. 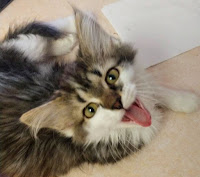 Next we have Izzy - a pretty blue mac tabby girl 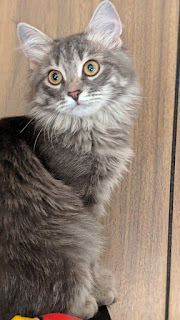 This lovely lady
has a great pedigree with loads of potential . Contact us today for her pedigree, parents health clearances , and details. 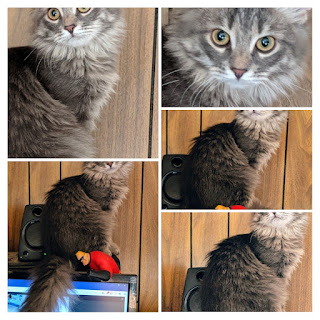 How can you resit this little face 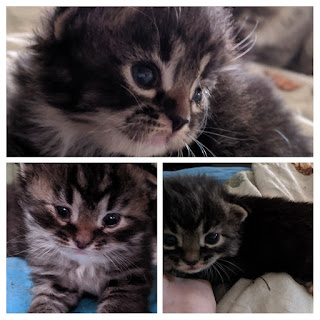 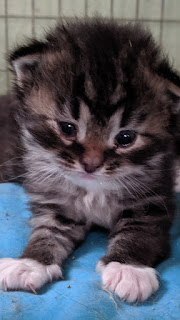 Posted by Kender Siberian Cats/Kittens in AZ at 10:05 PM 2 comments:

Just thought I would share a few toy suggestions.  We have tried many many toys over the years.
Some have been hits, and some abysmal failures.   But these couple of toys I have to say , are awesome !

This toy is smartly made - and completely enthralling ! As advertised  you open the box and poof ! you have TOY ! TADA !   it twists itself open having 2 hanging toys , 1 on each end with circular portholes to view the inside of the tunnel.  Then to me , the coup de grais is the removable crinkle pad !

I am not generally a fan of the Hartz brand but this gets a big thumbs up from us !


Next up - we have one pretty basic idea . The scratcher. There are many reasons we like this.
First its completely stable - no worries about it tipping and falling scaring kitty or even hurting kitty.
Two - its completely portable !  Room to room , even in a carrier  - remember when a cat scratches it releases pheromones.  Putting this scratcher in their carrier might help to keep kitty calm and feeling more secure !  Next - its CLEAR a woman thought of this design - because on the back of each scratcher is a soft padded material to PROTECT the back of your walls, doors cabinets etc ! Follow the link to get your own - or multiples! Also each pad counts as 1 item towards your free shipping on the PawTree Site !


Posted by Kender Siberian Cats/Kittens in AZ at 3:16 PM No comments:

Just showing off a little.  We finally made it over to the Regional Directors home to pick up our Regional Awards. 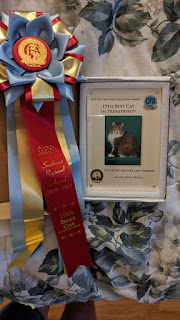 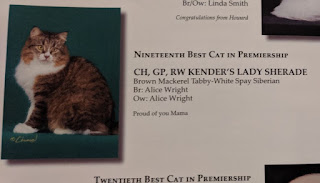 Posted by Kender Siberian Cats/Kittens in AZ at 5:50 PM 1 comment: