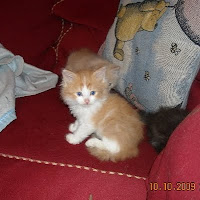 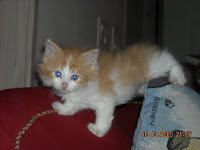 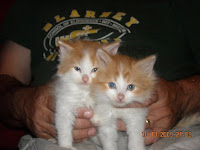 Yep - seeing double around here. These 2 boys are too cute, and way too much alike. Born 9/1 so just 5 1/2 weeks old
Posted by Kender Siberian Cats/Kittens in AZ at 9:18 PM No comments:

Okay so the CFA points are posted and Miss Tonks officially has 149 Grand points! Yeah.

Got a nice surprise today. Got the new copy of CATS USA 2010 Ed. and in it, I was directly quoted 2or 3 times in reference to the Siberian. Its really kind of neat. on pages 10 and 11 there is a short blurb in regards to the Siberian with a nice kitty pictured.
Posted by Kender Siberian Cats/Kittens in AZ at 10:04 PM No comments: 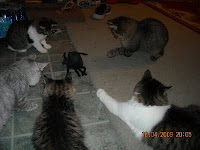 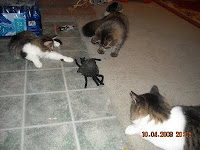 I received several nice complements on my cats temperaments this past show. On how they seem to take everything in stride, and yet are still very handle-able and pleasant. Anyone can take them to and from a ring. Kids can be noisy. Cages can drop. Any number of things can happen in a show hall - and my cats seemingly take it all in stride.

What a nice compliment. but conversely it does raise the question of why. So I have included a couple of photos to kind of give you an idea of how my home operates. What you see here is a Halloween spider that jiggles across the floor while making squeeling noises. Looks like loads of fun - what the casual observer doesn't realize is that my 2 boys are in the background yelling and running around. And that earlier we were testing another Halloween "thing" that is a full size broom on wheels that screams, laughs and "chases" people - or in this cases cats around smooth surface floors - it is really quite the decoration. Bill, the big brown tabby kitten on the right, eventually "caught" the spider and tried shaking it like a puppy while the others caught on to the broom of smacking it to make it move and chase their neighboor !

So when a kid cries in a show hall or someone drops something or any number of things that can happen - my cats simply shrug their shoulders and say "hey, you think that's bad? Try living at our house!"
Posted by Kender Siberian Cats/Kittens in AZ at 9:31 PM No comments:

Kender's Don't Call Me Nymphadora Does it AGAIN!

Well I know I have said it before but GIRLS RULE! Miss Tonks was at the one day CFA Harry Potter show today - and while it was a pretty small count - she did manage to pull 5 out of 6 Championship Ribbons out of it! a 3rd Best LH Ch, 3 2nd Best LH CH's, and a Best LH Ch & a 2nd Best AB Ch AND a nice 10th Best LH Specialty final to boot. So I believe if my math is correct (and as always pending CFA posting of the points) she will have acquired 26 Grand points for a total of 145. Again - all by the tender age of 10 months.

And we had 2 judges who singled her out for very very nice comments. 1 comment was "can't wait to see her as a grand in a few months" and the 2nd comment was "when you have something special, you remember it". I was surprised, pleased and touched.
Posted by Kender Siberian Cats/Kittens in AZ at 10:55 PM No comments: