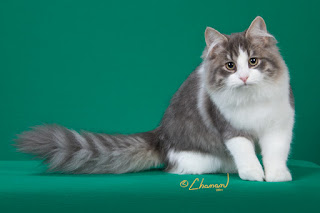 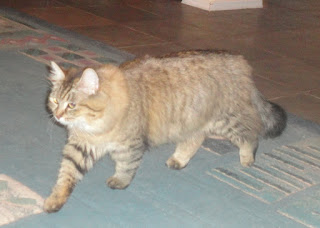 Well the show season has drawn to a close. And we are more than pleased. at this weekends show - we were successful in granding 2 more girls! Kender's The Devil Wears Prada and Judo's Little Bit O Honey of Kender , both new Grands (pending CFA confirmation). We also had pictures by Chanon done of Honey

Feeding - What We Feed

One of the most common questions I get is what do you feed and why.  Well - We feed raw daily - by Blue Ridge Beef   All human grade ingrediants, flash frozen - . The Mix - is our product of choice and with it we add in a sprinkling of Nu Vet Vitamin mix.  We believe in this combination and send home starters of the Nu Vet with every kitten we place.

We mix this into their daily raw food and obviously with great results.  We get strong, big, healthy animals with great coat. We hope you will continue the good eating practices we have begun with your new kitty from us - by continuing to use this great product! NuVet Labs
We love animals and we know you love them too! Unfortunately, the majority of dogs and cats are not receiving a complete, healthy diet and many become ill and die prematurely.  NuVet Labs™ main purpose is to help increase your pet's longevity and quality of life. Our products, NuVet Plus™ for Canines and NuVet Plus™ for Felines, provide the very best human-grade, natural ingredients available and utilize the latest advances in medical, veterinary and nutritional science. We pledge to adhere to the highest standards in products and services. Our goal is to maintain a lasting and caring relationship with our family of NuVet Plus™ customers and their pets they love.
Our scientists, veterinarians and formulators began with the premise that most pet diets are lacking the proper amounts of vitamins, minerals and antioxidants. There are important nutrients that animals once received when they were living in a more primitive environment that are not available in the modern diet. Commercial pet foods contain numerous by-products that can make them poisonous, toxic and incapable of reducing the devastating effects of unstable oxygen molecules, also known as "free radicals." Free radicals have been implicated in more than fifty health problems in humans and animals including various forms of cancer, heart disease, arthritis, cataracts and premature aging.
After extensive testing with many different combinations of ingredients, our scientists formulated NuVet Plus™. We believe, based on the most current medical, veterinarian and nutritional reports, NuVet Plus™ will combat the onslaught of free radicals in our companion pets. This unique formula consists of precise amounts of vitamins, minerals and high-potency antioxidants that when combined, create a synergistic and powerful boost to the immune system.

OR go to the NuVet site directly (you must enter the web address EXACTLY):
http://www.nuvet.com/25168
Scientifically Formulated to Provide Everything Your Pet Needs For Perfect Health!
**Bottle of 90 wafers**
**NuVet Plus Vitamin Supplement for dogs**
Dosage: 1 wafer per day for dogs 5 lbs and over. 1/2 wafer if under 5 lbs. Heals and Protects
your Pet – for life!
NuVet Plus heals and protects against the ravages of
free radicals that attack your pet throughout its life.
Fully safe and affordable**!
Ø  NuVet Plus helps prolong the life of your dog and cat
Ø  And eliminates most ailments
Ø  GUARANTEED!
* Allergies
* Skin and Coat Problems
* Scratching, Itching, Biting
* Hot Spots
* Arthritis and Joint Problems
* Premature Aging
* Low Energy Levels
* Diabetes and Liver Problems
* Cataracts and Tumors
* Digestive Problems
* Tearing
* Heart Disease
**Saving JUST ONE major trip to the vet could pay more than a lifetime supply of NuVet Plus®
NOTE: This product is Not available to the general public without an Order Code supplied by your Pet Professional
Not available in stores – CALL NOW TO ORDER!
>> Helps Heal Current Problems – and Protects the Life and Health of Your Pet – Starting Today! <<
Not available in stores – CALL NOW TO ORDER! – 800-474-7044 – Order Code: 25168

The combination of these 2 products - fed daily - along with offering a high quality dry kibble for "snack" time - such as Royal Canin, Earthborn, CORE or Blue Buffalo will give your cat the complete diet it needs to help stay healthy.
Posted by Kender Siberian Cats/Kittens in AZ at 7:32 PM No comments:

We had a small but friendly and fun turn out today for the kitten meet and greet. Everyone had fun, played with the kitties, got questions answered and had a snack! Will try to have another one in May - but these are ONLY for our kitten families with Paid Deposits! Won't you join us next?

Draco had to be the center of attention for a while. He is such a showman! Can 't wait to get him out in the ring! 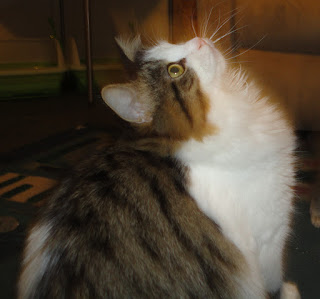 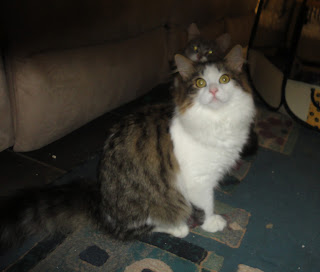 Then this young man stole the show for a while. I just love his head - everything about him screams showman up to and including his outgoing amazing personality.  We have decided to temporarily call him Mundungus, keeping with the Harry Potter theme. 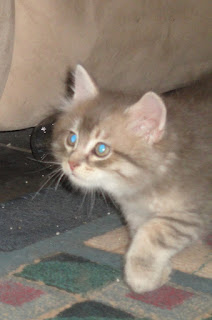 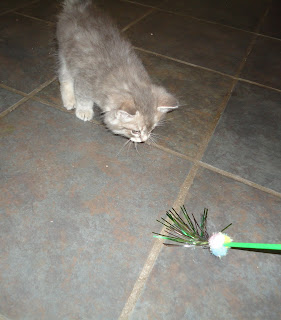 Isn't Mundungus too cute? He sure thinks so! 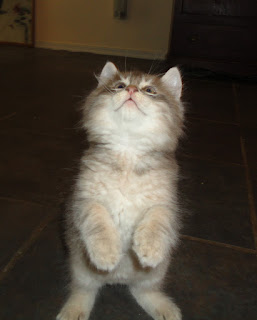 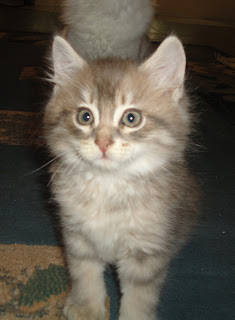 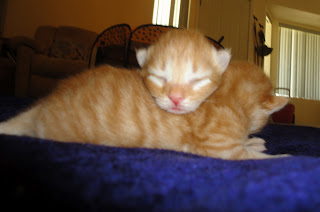 And her are Fred & George - what absolutely striking color and distinct patterns even at this tender age!  Both of these boys will be made available - so reserve early! 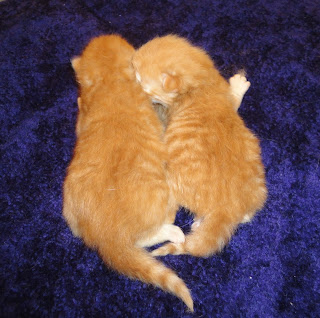 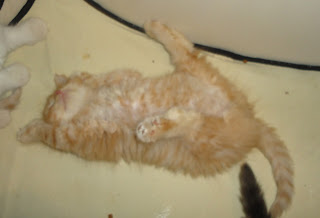 This red mackeral girl (yes I said GIRL!) is also available to reserve - what a sweety - just couldn't stay awake with that full tummy! 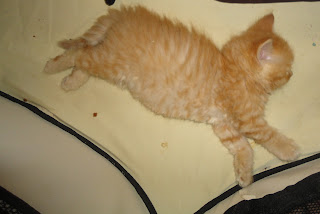 More of Mundungus - the scene stealer! 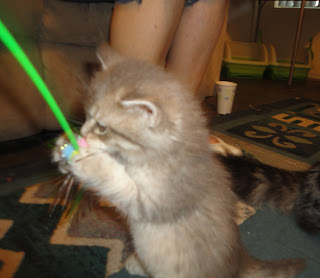 This lovely boy was just having too much fun playing HE is a nice high white brown mac tabby & white - AVAILABLE TO RESERVE! 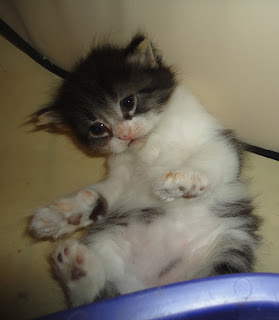 This sweet girl is a bit shy right now  but it is so hard to shine with all these "big kids" around! - AVAILABLE TO RESERVE! DON'T MISS HER! Brown mac tabby 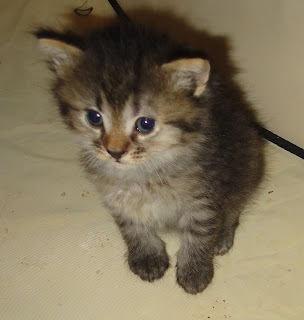 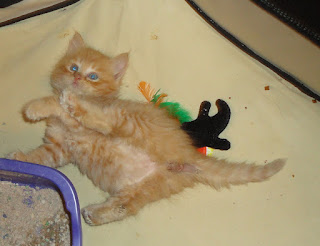 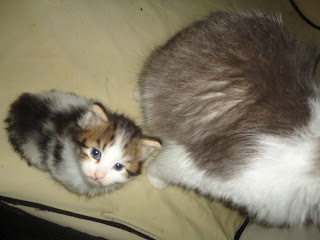 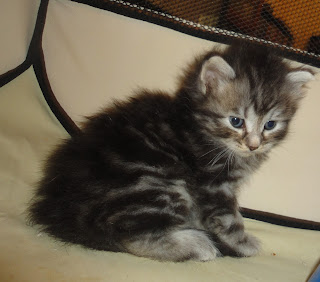 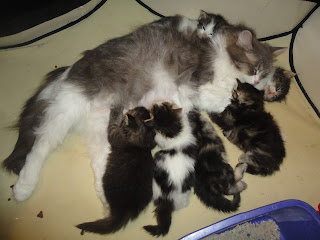 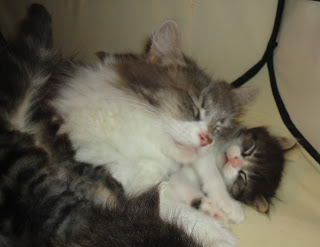 Posted by Kender Siberian Cats/Kittens in AZ at 5:49 PM No comments:

With the weather warming up rapidly -and as summer approaches,  A LOT of vets are pushing Heartworm testing to protect your pets and in dogs - absolutely without fail we believe you should do it. However, here is a bit of information about Heartworms straight from the eeer... horses mouth.  We invite you to read the facts about Heartworms in cats - who are at best "resistant" hosts. Also please not at the bottom of the article that there are only 4 (count 'em 4) products approved for use in cats to prevent Heartworms. 1 of them is a product called Revolution - which we use regularly here at Kender Siberian Cattery.  The whole article may be found at the link below :


Pet Owner Resources | Feline Heartworm
A A A

Heartworm infection takes place when a mosquito carrying infective, microscopic-size heartworm larvae, bites into a cat for a blood meal. The larvae then actively migrate into the new host and develop further as they travel through the subcutaneous tissue in the cat's body. At about 3-4 months, they usually settle into the arteries and blood vessels of the lungs, where they continue to develop to sexual mature male and female worms (Dirofilaria immitis). The average time from when the microscopic parasites enter the host until the females develop into mature worms and produce offspring is approximately eight months and is referred to as the prepatent period. This is about one month longer than in dogs.
As adults, the heartworms can mate and the females can release offspring called microfilariae (pronounced: micro-fil-ar-ee-a) into the blood stream. The cycle begins again when a mosquito takes a blood meal from the newly infected cat and draws the microfilariae into its system.
Cats are resistant hosts of heartworms, and microfilaremia, (the presence of heartworm offspring in the blood of the host animal), is uncommon (usually less than 20% of cases). When present, microfilaremia is inconsistent and short-lived. Some cats appear to be able to rid themselves of the infection spontaneously. It is assumed that such cats may have developed a strong immune response to the heartworms, which causes the death of the parasites. These heartworms may die as a result of an inability to thrive within a given cat's body.
Cats typically have fewer and smaller worms than dogs and the life span of worms is shorter, approximately two to three years, compared to five to seven years in dogs. In experimental infections of heartworm larvae in cats, the percentage of worms developing into the adult stage is low (0% to 25%) compared to dogs (40% to 90%).
However, heartworms do not need to develop into adults to cause significant pulmonary damage in cats, and consequences can still be very serious when cats are infected by mosquitoes carrying heartworm larvae. Newly arriving worms and the subsequent death of most of these same worms can result in acute pulmonary inflammation response and lung injury. This initial phase is often misdiagnosed as asthma or allergic bronchitis but in actuality is part of a syndrome now known as Heartworm Associated Respiratory Disease (HARD).


Which Cats Are Susceptible?

Although outdoor cats are at greater risk of being infected, a relatively high percentage of cats considered by their owners to be totally indoor pets also become infected. Overall, the distribution of feline heartworm infection in the United States seems to parallel that of dogs but with lower total numbers. There is no predictable age in cats for becoming infected with heartworms. Cases have been reported in cats from nine months to 17 years of age, the average being four years at diagnosis or death.

The clinical signs of heartworm infection in cats can be very non-specific, and may mimic many other feline diseases. Diagnosis by clinical signs alone is nearly impossible, but a cat may exhibit generic signs of illness, such as vomiting intermittently (food or foam, usually unrelated to eating), lethargy, anorexia (lack of appetite), weight loss, coughing, asthma-like signs (intermittent difficulty in breathing, panting, open-mouthed breathing), gagging, difficulty breathing (dyspnea) or rapid breathing (tachypnea).
Signs associated the first stage of heartworm disease, when the heartworms enter a blood vessel and are carried to the pulmonary arteries, are often misdiagnosed as asthma or allergic bronchitis, when in fact they are actually due to a syndrome newly defined as Heartworm Associated R espiratory Disease (HARD).
Some cats exhibit acute clinical signs, with disease often related to the organs where the adult heartworms are thriving. Occasionally such infected cats die quickly without allowing sufficient time to make a diagnosis or offer appropriate treatment.

Heartworm infection in cats is harder to diagnose than it is in dogs and it is easy to overlook. Diagnostic tests have limitations, so negative test results do not necessarily rule out an infection. Antigen tests, for example, only detect adult female or dying male worms. Immature or male-only worm infections are rarely detected.
The diagnostic plan for heartworm disease in cats can include, but is not limited to, a physical examination, radiography (X-ray), echocardiography (ultrasound readings of the heart), angiocardiography (X-ray of the heart with injected contrast fluid), CBC (complete blood count), serologic testing (antigen and antibody study), microfilaria testing, and necropsy (after death).

It is generally recommended that all cats be tested for both antigens and antibodies (serology) prior to administration of a heartworm preventive. There are four heartworm disease preventive products approved by the FDA for use in cats, Heartgard® for Cats (Ivermectin, orally) from Merial, Interceptor® (Milbemycin oxime, orally) from Novartis, Revolution® (Selemectin, topically) from Pfizer and Advantage Multi™ for Cats (Moxidectin / imidacloprid, topically) from Bayer. All of these products are considered effective in preventing the development of adult heartworms when administered properly on a monthly basis relative to the period of transmission.


Posted by Kender Siberian Cats/Kittens in AZ at 7:33 AM No comments: 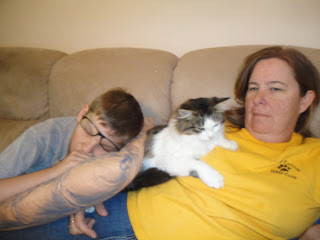 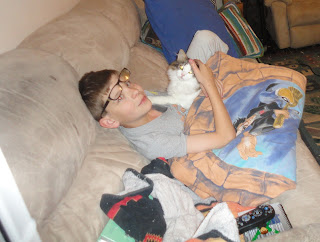 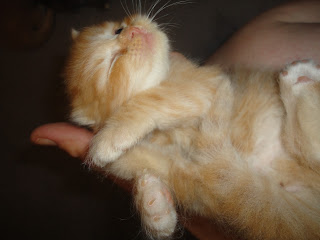 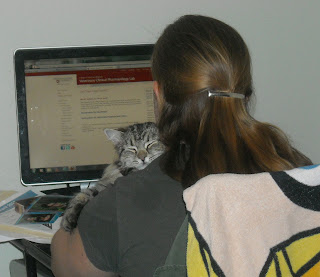 Posted by Kender Siberian Cats/Kittens in AZ at 5:41 PM No comments:

Kender's The Devil Wears Prada - made 2 AB Finals this weekend aquiring 44 additional grand points while at the San Mateo show. Woo Hoo - just 10 months old and now has over 100 total points so far!
Posted by Kender Siberian Cats/Kittens in AZ at 10:01 PM No comments: