Our First Day Without Serge

It just dawned on me - re-reading my earlier post about the great kitten hunt - that had my beloved Serge still be with us - he would have tattled on the girls immediately, and I would not have had to hunt at all - he would have sat at that ajar door and yowled until I "got it".

He's only been gone 36 hours - and our home is a lesser place for it.
Posted by Kender Siberian Cats/Kittens in AZ at 8:49 PM 1 comment: 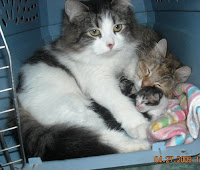 Well, here was an interesting situation. Last night around 9:30 I went out with the boys - to go meet JoAnn at the hotel and pick up my Bear. She had been showing him in CO for me where he made 2 finals. Well - we get home late, after 11:30. After everything else gets accomplished, I go to put the two mothers that are co-mothering their litters up - same pattern as every night. Only the babies are not there. In fact I can't find the babies anywhere! I searched for over an hour with a flashlight, including tearing apart my closets, the kids closets, the playroom closet and looking under furniture with a flashlight - no babies. So as panic sets in , I go back into the master bath to start all over. And notice that the door to the linen closet is slightly ajar. The TOP linen closet. The closet that is a full 5 feet off the floor - so I open the door no cat or kittens and I think okay - forgot to shut the door. Then I look a bit closer - and realized that the towels are sideways not straight - well way in the back at the bottom of the closet behind a 2 foot "wall" of towel - are the 4 missing babies and Sybil. Just as warm and snug as can be. The Buggers!
Posted by Kender Siberian Cats/Kittens in AZ at 6:27 AM 2 comments:

Serge - The End of An Era for Kender

Well today was the end of an era here. Furtuosity's Serge Veetovich of Kender passed the Rainbow Bridge just days shy of his 16th birthday. "Serge" had been a fixture of this cattery since he was 4 months old. Neutered at that age - never sired a single kitten for me - but was the Siberian ambassador in multiple associations when I was asked to give talks about the breed. He went to schools for grooming and care lessons - and never met a camera he didn't like.

Serge was from Audrey Olivers very first litter of Siberians born to Furtuosity cattery. Out of our shared import female Karoline Abakan of Furtuosity/Kender. Karoline only ever gave us this single litter of 3 boys. A red & white classic boy that over time we lost track of - he was placed with a lady in Ny by Audrey. Illya was a red classic boy who was used extensively by both our cattieries over the years - with great success as told by our strong look, good health and winning cats. Illya preceeded Serge to the Rainbow Bridge by many years - dying ast the age of 7 from a sudden onset liver failure never fully identified. And Serge. Who was technically the runt of the litter. Another solid red classic boy. I decided to keep him, neutering him as a baby and the rest as they say is history. He was shown over the years to literally over 150 different judges at events and training for the Siberian breed. He was the model spokes-kitty. ACA, UFO, AACE and a few ACFA schools all benefitted from him being present.

At home he was the one who kept everyone in line - including we humans. If a food bowl was too low, or a kitten was stuck in a closet - you could count on Serge to harrass you until the problem was resolved.

The big red boy is gone. Peace.
Posted by Kender Siberian Cats/Kittens in AZ at 10:33 AM 4 comments:

Welcome, Kender Siberian Cats & Kittens is trying to join the 21st century. I guess only time wil tell how good of a job I am doing. First let me introduce myself. My name is Alice and I own, raise and show Siberian cats under the cattery name of Kender. We have been dedicated to the Siberian since 1992. We have shown and exhibited in almost every US association including CFA, TICA, ACA(now defunct), ACFA, AACE, and UFO(I believe now defunct)

Watch for updates
Posted by Kender Siberian Cats/Kittens in AZ at 9:10 PM 2 comments: