Okay - so Tonks and Bella were both in Colorado this weekend for the CFA show there. 2 day - 8 Rings. And competing against them, was a lovely solid brown tabby boy who is 3 1/2 yrs old - so we are talking a mature male! And all of them were Champions competing for Grand points. On Saturday - mostly to be expected he took the breed in 3 out of the 4 rings - with Tonks picking up the 4th ring - adding 2 grand points to her count. None of the Sib's made a final.

So with today - our hopes were not too strong. But as fate would have it! Miss Tonks took the breed in 2 more rings today AND placed in a LH Champions ribbons - adding a total of 18 points this weekend (pending CFA conformation). Not bad for a 10 month old baby girl.

But the icing on the cake was Miss Bella - who only managed to take the breed in 1 ring but what a ring! She made a 2nd Best Allbreed Champion giving her around 30 Grand points - but she only needed 15 to complete her Grand - so now we Proudly re-introduce to you CFA's GRAND CHAMPION Kender Faithful Servant. There are less than a dozen female Siberian Grands in CFA. Bella now joins their ranks (pending CFA conformation). At less than 2 years of age.

Thank you so much to everyone who has followed this special girl.
Posted by Kender Siberian Cats/Kittens in AZ at 5:26 PM 2 comments: 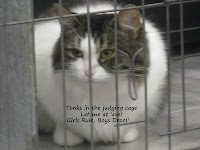 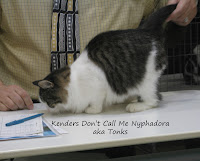 These are a couple of pictures of Miss Tonks taken by Sue at the show
Posted by Kender Siberian Cats/Kittens in AZ at 8:33 PM No comments:

Well, After our local 2day shows Little Miss Tonks is again proving she can hold her own with the "big boys". There were 2 "older" boys entered as compared to her little 9 months age. out of 12 rings she beat them out 5 times for best of breed, including adding 3 more finals to her belt. Neither of the other sib boys took more than a single final - so she is officially sticking her tongue out! GIRLS RULE! hehehehehe
Posted by Kender Siberian Cats/Kittens in AZ at 10:20 PM No comments: